Quick Refresher: Golden Rules of the Road for Back to School 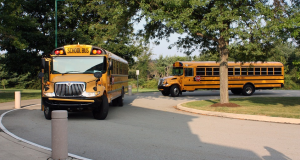 As the song goes, “School days! School days! Dear old golden rule days!” It’s back to school time, so let’s brush up on some of the golden rules of the road to keep our kids safe as they travel to and from school.

What the Law Says

Reduce your speed in school zones.

In Massachusetts, the speed limit in all school zones is 20 mph. It’s also illegal to pass other motorists, and pedestrians in crosswalks always have the right-of-way. Kids can be tiny and fast, and (as most parents can attest) are often unaware of their surroundings, so the responsibility lies with drivers to pay attention.

State law requires that all drivers in Massachusetts stop at least 100 feet away when a school bus stops to pick up or drop off children. Remember too that drivers in both directions must stop. The only exception is on divided highways with a barrier, in which case only the drivers going in the same direction as the bus must stop.

You can tell that a bus or other school transport vehicle with a “school bus” sign is stopped to pick up or drop off children when its flashing red lights are on. Yellow school buses also have stop signs that fold out of the driver’s side. This means you must stop and remain stopped until the driver turns the flashers off and retracts the stop sign. You may pass a school bus that is stopped without flashing lights or an extended stop sign if it is safe to do so.

In Massachusetts, it is illegal, and dangerous, to text while driving, including writing, reading or sending text messages, even while stopped in traffic or at a stoplight. It is also illegal for drivers under age 18 to talk on their cell phones while driving.

Drivers ages 18 and above may talk on their phones if at least one hand remains on the wheel and doing so does not interfere with driving. This means that if you are talking on your phone and get into an accident, you will likely be cited for distracted driving (or even sued).

While the state enforces the laws above, which can leave you with some hefty fines, it’s important to also exercise common sense, such as:

We wish everyone a safe and successful return to school!